One of the things you begin to truly appreciate is the convenience of a networked printer. When our last one stopped working due to a drum failure, we were left with a single, USB-only Brother HL-2140 laser printer. And while it certainly worked, being able to print only from one computer was a real pain in the ass!

With a spare Raspberry Pi lying around yet again, it was time to fix that. The end result was a fast, AirPlay compatible, on-demand print server, with Windows clients connecting using LPR and *nix clients via IPP.

I’ll start off by saying that nowadays, printers are so cheap that they’re essentially throw-away items. Networking capability is also more or less a given, with the price point as low as $65-$70. When put into perspective, that’s only slightly more than the cost of a Raspberry Pi! Granted, this project was more about making the most of equipment already at hand.

My use case is for a home environment, where more often than not, the printer is off. This is unlike in an office, where the printer is almost always online. As a result, my requirements were:

This is fairly specific, but they were nuances that I noticed and liked about the old printer. Importantly, none of the countless online tutorials cover these issues:

Setting up the Raspberry Pi

To ensure the fastest boot time, I wanted to use the slimmest (as reasonable) possible operating system. My go-to solution for this is the raspbian-ua-netinst project, which allows you to make a minimal Raspbian installation. The steps are fairly simple:

Given that the installation is minimal, there are less conveniences provided out of the box. These steps make it a bit nicer to use:

Setting up the print server

At this point, we will be installing a minimal CUPS server installation.

At this point, the RPi is mostly configured. Try adding and using the printer from your devices:

Further customisations to the RPi

As an embedded system, it’s a good idea to enable the watchdog, which will restart the system if for example the RPi crashes or locks up.

To make the RPi more resilient to frequent power interruptions, I wanted to make the file system read-only. This would also help to prevent unnecessary wear to the microSD card.

What I found to work was overlayroot, which makes changes to the file system temporary. When changes are made to the filesystem, they are stored in-memory. Changes are then lost on the next reboot.

To set this up, I suggest to follow the instructions provided in that repository. As a point of clarification, if you wish to make persistent modifications once this overlay system is in effect, simply run the rootwork script to get a shell where modifications will stick:

Modifications to the printer

WARNING: This section involves modifying the internals of your printer. In addition to potentially voiding your warranty, there is high voltage circuitry inside, which must be handled with utmost care. Attempt this section at your own risk.

As I wanted the RPi to start and stop with the printer being turned on and off, I wanted to tie its power supply in some way to the power switch on the printer. I could either do this on the mains side by inlining the RPi’s power supply to the switch, or I could simply tap off the 5V rail of the printer’s own power supply.

Given that I didn’t really want to touch the mains side electronics, I had to find a point at which it supplied 5V power. Luckily, it appears that this is possible by tapping off the printer’s mainboard.

Unfortunately, I also forgot to take photographs while doing this, but luckily it’s not too hard to find the service manual. The mainboard is on the left side of the printer, as shown below: 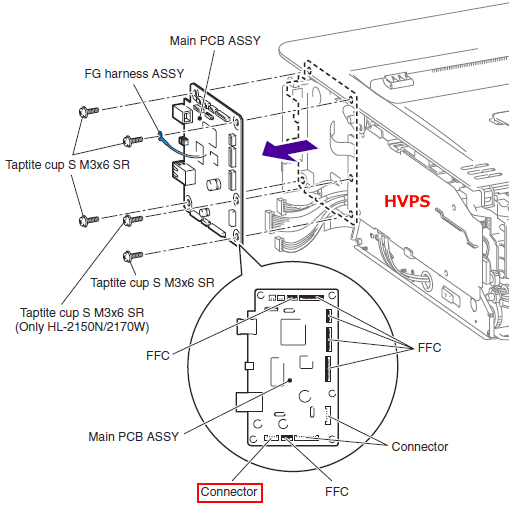 The connector highlighted in red is where I tapped off the 5V power supply. From the service manual, the +5V pin is the 2nd pin from the right, with GND being the 3rd pin from the right. It’s best to confirm this with a multimeter.

Also note the high-voltage power supply (HVPS) that I have highlighted in red. This is the power supply that steps up the mains voltage, presumably for use with the laser. You can identify it by the extensive anti-tracking slots and wide isolation gaps on the PCB. It goes without saying, but you really do not want to play with this circuit. You have been warned.

To connect this up to the RPi, I had a spare USB extension lead like this: 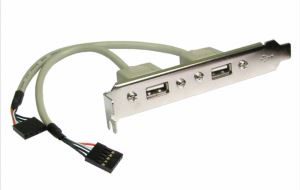 This was actually perfect, because I could fit one of those ports into the existing housing fairly easily. I just had to drill out the backplate that also held the existing USB port. With some care, you can drill the holes for the screw terminals, so that you can secure the port to the backplate. I then cut off the original connector and the data wires, leaving me with only the +5V and GND lines. I then just tinned those lines and stuffed them into the existing connector.

With everything back in place, this connects to the RPi via its microUSB port, while the existing USB-B port connects via the RPi’s normal USB ports.

All in all, I think the modification went well. I was quite happy with how clean the physical modifications to the printer were, with my only concern being if the RPi would overload the printer’s internal power supply. In hindsight, it would have been better to measure the current draw of the RPi, but with everything fitted back together, I am reluctant to open it again. I guess time will tell how well it holds up!

Software-wise, it did take a few attempts and false-starts to get everything to where I was happy, but it does seem fairly robust. For what it’s worth, the idea of using LPR for Windows was based on what my old printer did. Sure, it’s an older and less ‘advanced’ protocol than IPP, but it works, and works well. One thing that doesn’t work is the printer status. I think this works through SNMP, but I don’t know how to properly configure this through CUPS.